A Collective Noun is used to refer to a group of persons, animals or things; it therefore includes more than one member.

For example, the collective noun Family stands for parents and children. A Pack contains many wolves/ dogs. A Fleet is made up of several ships.

Here are examples of some common collective nouns:

Today, we will be looking at the most commonly used Collective Nouns related to People, Animals and Things. We will also be learning Partitives which uses phrases like, a bar of, a packet of, a piece of, a drop of etc.

Once we’ve learned the vocabulary related to collective nouns, we will try to understand how to use these collective nouns in sentences; more importantly, which verb we should use – Singular or Plural!

So let’s get started…

Partitives are words like a bar of, a tin of, a piece of, a drop of etc. that we use for both, countable and uncountable nouns. They are useful because they make it possible for us to count uncountable nouns.  Let us see a few examples of Partitives we use in our everyday lives.

We often use Partitives like a bunch of, a glass of, a slice of, a packet of etc. to quantify most of the food we eat and drink. Let us now learn some commonly used partitives related to food.

FILL IN – WITH SUITABLE PARTITIVES:

In order to learn whether Collective Nouns take the Singular Verb or the Plural Verb, we need to understand some basics.

You may remember studying in school that Verbs refer to the Action performed by the Subject. Let us first see some simple examples of Singular and Plural Verbs.

Now let’s learn how sentences with Collective Nouns are constructed.

For the purpose of easy understanding, let us concentrate on just three Collective Nouns – Family, Team and Herd

When we consider the Collective Noun as a SINGLE UNIT performing a single task or while describing common characteristics, we use the Singular Verb.

This Family Comes from India.

This Herd Lives in my sister’s farm.

Sometimes, instead of considering the group as a Single Unit performing a Single Task, we may consider them as INDIVIDUAL MEMBERS who are different from each other or performing different tasks.  In such scenarios, the Collective Noun takes a Plural Verb.

The (members of this) Family Enjoy narrating their individual accomplishments.

(Here, the members of the family are NOT considered as a single unit but as individual members who have different accomplishments. )

The (members of this) Team Have different educational qualifications.

(Here, the members of the team are considered as separate individuals having different educational backgrounds.)

The (members of this) Herd Come from different parts of the country.

(Here, the members of the herd are considered as individual animals and not as a single unit.)

Note: The above information is only a guideline to determine whether it would be more appropriate to use a Singular verb or a Plural verb with Collective Nouns.  This topic is debatable because what is generally the norm in British English may not sound right to an American, and vice versa.

In order to avoid confusion, remember to use the singular verb if you are looking at the group as a single unit;

And use the plural verb or try using “members of” before the collective noun, if you want to talk about the individual members.

FILL IN – WITH THE RIGHT VERB (AND EXPLAIN THE REASON FOR YOUR CHOICE):

Anger is one of the emotions we generally try to avoid, but sometimes, it gets to us and we need to use language to express it and let the other person know that we are angry.

So first, let’s learn a few words that mean the same thing as “Angry” or “Anger”. Next, we’ll try and understand a few Anger – Phrasal Verbs. Finally, we’ll look at some Anger – Phrases.

Below is a list of Anger – Synonyms. The words in this list are in increasing order of severity. So, if you want to say you’re ‘a little angry’, you can pick one near the top of the list and if you need to emphasize that you are ‘really very angry’, choose a word from the bottom.

In this way, based on the situation you could use the right word. Practice them and give them a try in your spoken English.

Here are some phrasal verbs you can also use to convey the fact that you are angry, and even mention the Cause of your anger.

(get to someone – means to bother/ irritate someone leading to anger)

(tick someone off – means to make someone angry)

The following phrasal verbs describe the Result of your anger.

(lash out – means to attack a person either verbally or physically)

If you are shocked and angry about someone’s actions.

What do you mean?

If you are shocked or annoyed about something that someone just told you, or if you disagree with them

You can use this when you are annoyed with someone for a wrong/ careless action, and want them to see/ understand its consequence.

This is an expression to let someone know you are annoyed, and what they’re saying or doing is NOT funny.

If you want to emphasize that they do the same thing all the time, and this annoys you.

7.Mind your own business!/ It’s none of your business!

These expressions are rude and are used in anger, to tell someone off, especially when they ask questions, or meddle in matters that neither affects nor involves them.

You can use this expression to show you are annoyed or tired with something that’s been happening for a long time and you feel frustrated/ irritated.

You use this phrase when you’ve reached the limit of your tolerance of other’s actions, and you are not willing to put up with it any longer.

This is an expression used to indicate that you are extremely angry with someone or something.

This phrase has multiple meanings but you can use it when you are angry or surprised at what someone has said.

This phrase also has other meanings, but you can use it if you want to express that you are annoyed by something someone has said, and you don’t think it’s true or you think they don’t mean it.

Although this expression also has multiple meanings, it can be used to indicate our frustration that something unpleasant is happening again.

Mom:    What is this! Not again! I thought you were getting better!

Mom:    Next time? All you ever do is watch TV and play video games. And now you say ‘Next Time’!

Son:       I would have scored better, if you had helped me, instead of going shopping with your friends.

Mom:    Hold it! Now you blame ME for not scoring well? 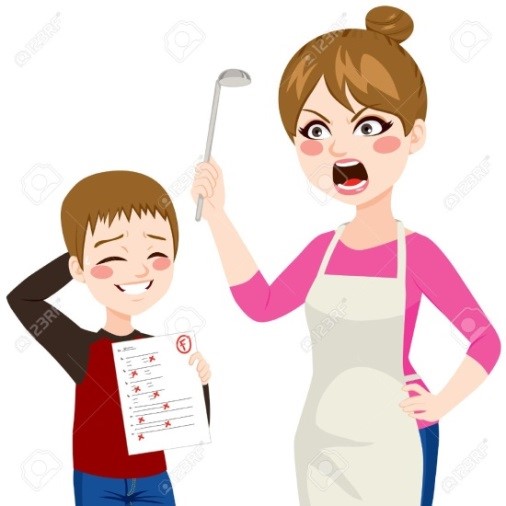 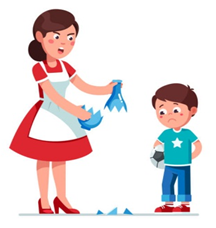 Bobby: Sorry! That was by mistake.

Bobby: But I did not mean to …

Maid:    Give me a break. I don’t believe a word you say. This is what you always say! 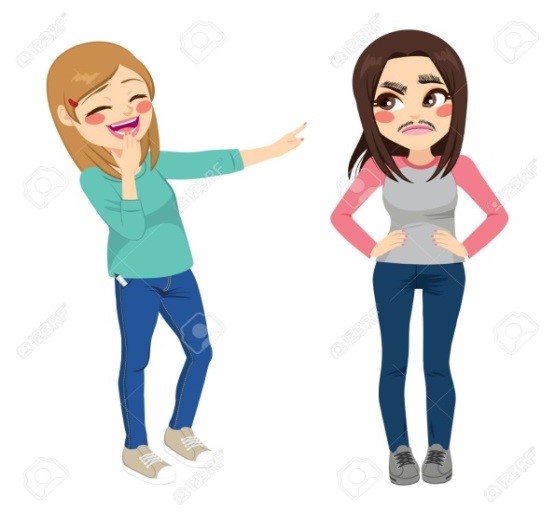 FILL IN – WITH COLLECTIVE NOUNS: 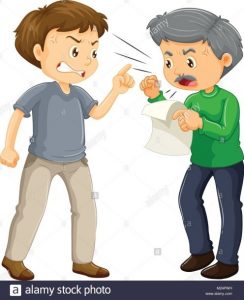 Imagine you see two people arguing over some wrong information. Try to talk to them and solve the problem. Try to give some reason as to why these people are fighting.

How will you talk about this to a friend you meet on the way.